I am interested to know how people managed to get a good measurements for a set of pastels.

The best fit I can get for the “Generate cone catch model using chart” function is shown in the pic below. What spectro setup did everyone use? What were your integration times? I am using natural sunlight as I did for the chart photos. I used an integration time of 30ms and each value is an average of 100 measurements. I find that if I lower the integration time the fit is worse but the measurements are less easily saturated.

I am running out of time to get this to work. Any advice would be greatly appreciated. 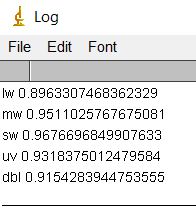